ELLINGER & ASSOCIATES, LLC
Marc Ellinger is a founding partner of Ellinger and Associates, LLC, and represents businesses, individuals, organizations and committees in disputes. Marc focuses his practice in election law, legislative and rulemaking practice, municipal finance and structuring, issues of state and federal constitutional law, gaming law, and appellate practice and is a Martindale-Hubbell AV Preeminent rated attorney.
​
Marc has more than twenty years of experience in election law and campaign finance compliance, including the representation of candidates, as well as ballot measure campaigns and Political Action Committees across the State of Missouri. Marc has drafted initiative petitions covering a broad range of subjects and has been involved in the coordination of campaigns and litigation on ballot measures, on behalf of both proponents and opponents.

Marc is also actively involved in representing businesses and individuals in gaming law, particularly with respect to the Missouri Gaming Commission license and compliance matters. He represents casino operators, gaming equipment suppliers, game developers and key persons throughout the gaming industry on a broad range of gaming and licensing matters. He is one of only two Missouri attorneys recognized as a General Member of the International Masters of Gaming Law and is recognized as a Super Lawyer in the Gaming Law area.

Marc’s background as a CPA allows him to view tax matters through multiple lenses.  Marc has represented numerous clients in administrative and civil cases involving sales, use and property tax law.  He also regularly advises clients regarding transaction structuring, including infrastructure related matters.

Marc has significant appellate experience in Missouri. He has argued more than twenty cases in the Missouri Supreme Court and dozens more in the Eastern and Western Districts of the Missouri Court of Appeals. From local government issues of first impression, to tax matters, to numerous election law cases, Marc has protected the interests of businesses, individuals and local governments across Missouri.

Marc started his career as legal counsel for the Missouri State Auditor in 1993.  In that role, he advised the State Auditor on constitutional and tax law matters, as well as matters related to municipal and state debt financing and regularly appeared before the state appellate courts and the Missouri Supreme Court on the Auditor’s behalf.   Marc transitioned to private practice in 1999.  Prior to founding Ellinger and Associates, LLC, Marc was a member of Blitz, Bardgett & Deutsch, LC. 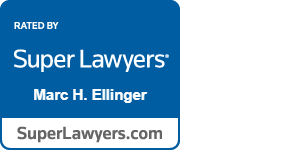